How To Install Exhaust Fan In Kitchen?

Exhaust fans are something that is necessary how kitchens. They help in reducing the extra smog, oily smells, the smoke created by frying or grilling.

Therefore for the kitchens that haven’t installed an exhaust fan, here is a guide on how to install exhaust fan in kitchen.

There are mainly two types of exhausts fans: vented exhaust fans and exhaust fans which are ductless. Each of them has their own work and helps in cleaning the extra smoke and unnecessary smog from the kitchen. 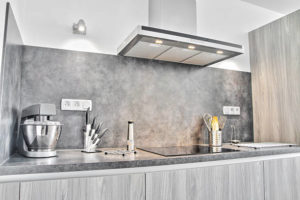 How to install exhaust fan in kitchen?

Depending on one’s kitchen, these both can be useful in many ways. So how to install exhaust fan in kitchen? Let’s see:

Vented exhaust fans are fans that have ducts and help one to clear the smoke from the kitchen and guide it outside in the atmosphere.

It is better for kitchens that are continuously used, such as a restaurant or a canteen kitchen.

To install the vented exhaust fans, one has to look for a hole in the wall, which is heightened enough for the smoke it goes out.

It is advisable that one uses drywall just below the ceiling and is above the gas stove for installing the vented exhaust fan.

The primary installation should be can be to experts as to when one buying a vented exhaust fan: the installation procedures are taken care of too. 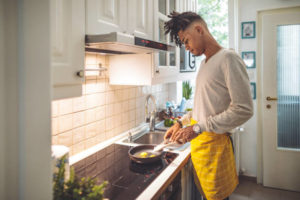 The ductless exhaust fans or unvented fans are the types of fans that can be installed anywhere. These fans aren’t used for pulling the air and smoke from the kitchen out in the atmosphere but rather to circulate the air inside the kitchen.

One can use these fans if one has a temporary stay and want to use the kitchen for cooking. One doesn’t even need to install it on any wall or need to call experts.

Simply, find a place where the fan is able to circulate the air and help one to clear the toxins and extra smoke away from the main cooking area.

All one needs to do is choose the area which suits the exhaust fan, which isn’t too far away from the gas stove or too near it.

Duct fans are used in the kitchens that are frequently used day and night, such as restaurant kitchens or even the house of people who have decided to live in that particular house for the long term.

These fans are the best: when it comes to clearing the smoke, and all the cooking and oily smell from the kitchen.

2. When to use ductless fans?

Ductless fans are used for kitchens that aren’t much used or which are temporarily used by people. If one is living in a rented house, there is no point in installing vented fans.

This kind of situation is the best where one should use the ductless exhaust fans.

PrevPreviousA Guide On How To Make Chapati In Roti Maker
NextHow To Fix Exhaust Fan At Home Itself?Next